“All my striving sought the light.” 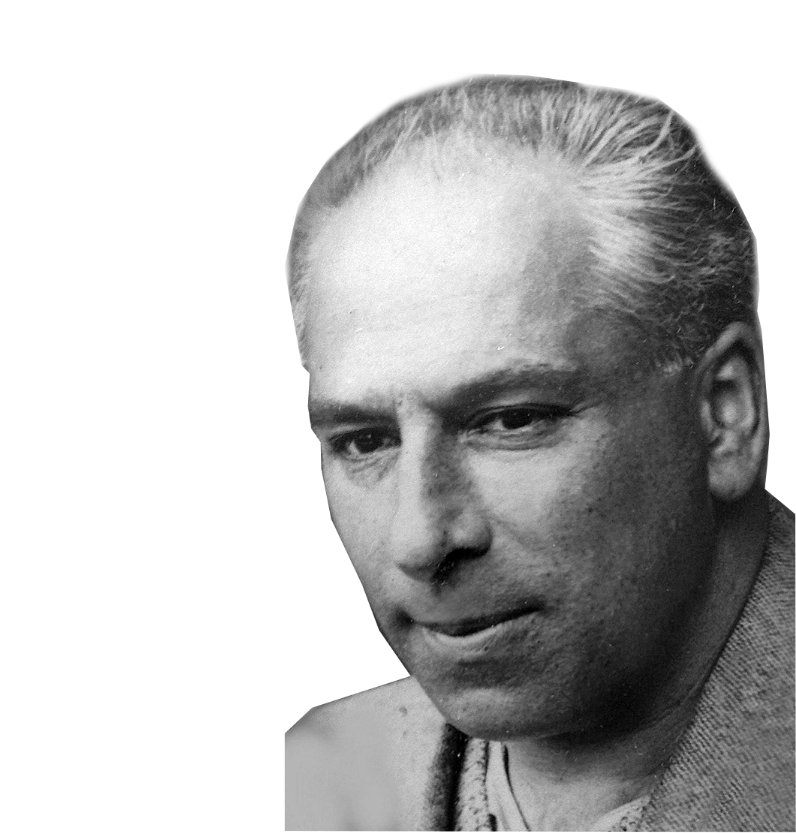 Fritz Ascher (Berlin, 1893 –1970) was a German-Jewish artist, whose work is characterized by Expressionist and Symbolist sensitivity. In paintings, works on paper and poetry he explored existential questions and themes of contemporary social and cultural relevance, of spirituality and mythology. With expressive strokes and intense colors he created emotionally intense and authentic work. Ascher’s work encompasses both the vibrant artistic scene in early 20th century Germany and the trauma and aesthetic shifts caused by Ascher’s persecution and deprivations during the twelve years of the Nazi regime.

Unable to Flee, Forced into Hiding

Born into a well-to-do Jewish family in Berlin in 1893, Fritz and his younger sisters had converted and been baptized as Protestants before Fritz turned ten. During Kristallnacht on November 9-10, 1938, Ascher was arrested for being Jewish, and interned as prisoner 11365 in the Sachsenhausen concentration camp. He was released in late December of that year with the promise of emigration to Shanghai, one of the only international destinations that did not require an entrance visa. But he was arrested again in January 1939 and missed the ship that was to take him out of Germany. After his release five months later from the Potsdam Gestapo prison, Ascher stayed in Berlin, under police surveillance. Warned of his imminent deportation in June 1942, he hid in the cellar of a partially bombed-out building in the Grunewald neighborhood in Berlin, helped by family friend Martha Graßmann. The war was almost over when on April 25, 1945 bombs destroyed most of the artwork that Ascher had left with friends. The Allied Armies liberated Berlin Grunewald on May 8, 1945.

Fritz Ascher was born into a prosperous German-Jewish family and was baptized with his sisters in 1901.

Until 1933, he often created symbolist-expressionist works with Christian and Jewish themes.

Between 1933 and 1945, he was persecuted by the Nazi regime, and survived in hiding.

From 1945 he created vibrant and expressive depictions of trees and flowers as well as portraits on paper.

Between 10-12,000 Jews in Germany tried to hide from Nazi persecution and about half did so in Berlin. Living as hunted prey, many Jews hid in dark places not moving at all, used buckets instead of toilets, found little or no opportunity to bathe, and sometimes became infested with lice. In Berlin, only 1,700 Jews—about a quarter of those who hid–managed to survived.

Fritz Ascher was born into an educated, wealthy upper middle class Jewish family in Berlin. Ascher’s father left the Jewish community officially in 1899; Fritz and his two younger sisters were baptized in 1901. In 1909, the sixteen-year-old Ascher was recommended to the progressive Art Academy Königsberg by Max Liebermann, the influential president of the Berlin Secession and later head of the Prussian Academy of Arts. 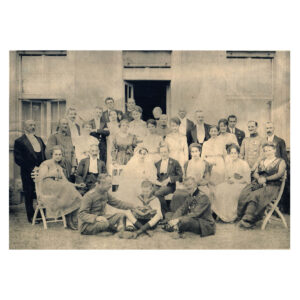 Fritz Ascher is in the back row, third from the right. Bianca Stock collection 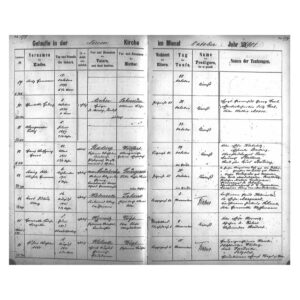 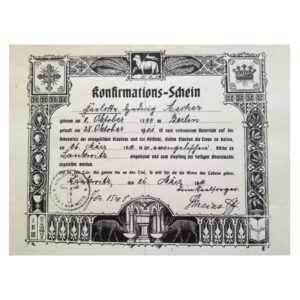 Back in Berlin by 1913, Ascher created symbolic and narrative art with themes and motifs that stem from both Christian and Jewish cultures. His work shows expressionist sensitivities, with non-naturalistic figurations, dramatic color juxtapositions, depicting states of experience beyond the visual. His figures often have grotesque features and fierce expressions, his colors are saturated and a little acidic and his compositions are compressed. 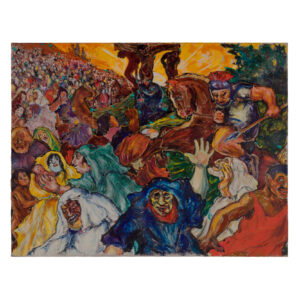 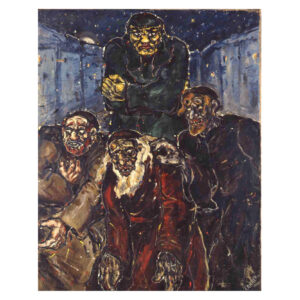 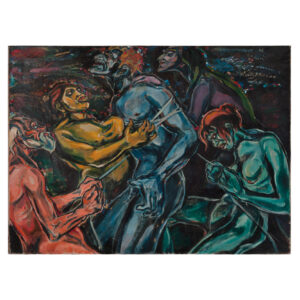 During the Weimar Republic, a period that fostered an atmosphere of change, Berlin grappled with the legacy of the First World War. Ascher depicts wild scenes of violence and figures with their faces contorted in fear. 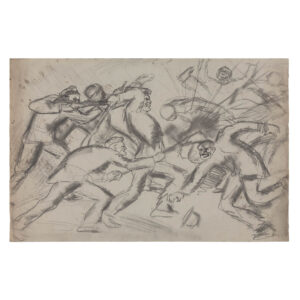 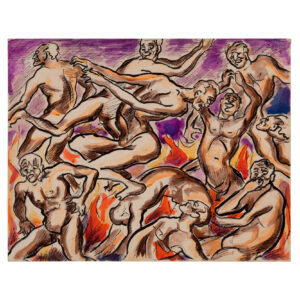 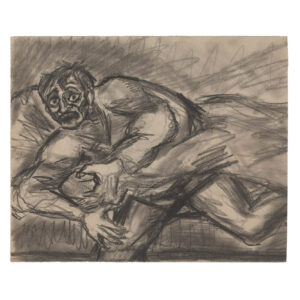 After Adolf Hitler became Chancellor of the Reich on January 30, 1933, Ascher felt persecuted immediately. He assumed that he had been denounced to the NSDAP (National Socialist German Workers’ Party) as politically and artistically suspect. He began to constantly change his place of residence and was forced to abandon painting and drawing altogether.

He had reserved a sea passage to Shanghai that was confirmed in July 1939 but his plans were thwarted by the Gestapo and the tax office. He was put under police surveillance for six months. Every second day he reported to the police, until the officer warned him of his imminent deportation.

From June 15, 1942 Ascher was hidden by family friend Martha Grassmann in the cellar of a partially bombed-out building in the Grunewald neighborhood in Berlin. In his hiding place, immobility and loneliness, hunger, fear of betrayal and discovery, torture and death never left him. Here, he composed poems about love and the divine, and tributes to his artistic role models. Other poems evoke nature as a place of refuge and a spiritual home. 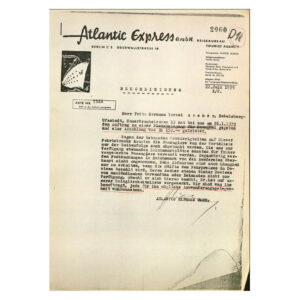 Fritz Ascher’s reservation for a boat ticket to Shanghai, July 22, 1939 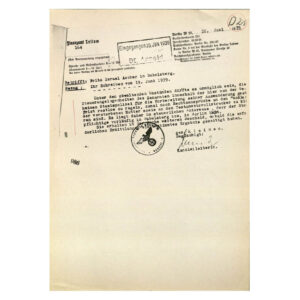 Letter from tax office to Fritz Ascher refusing him permission to leave the country, June 22, 1939 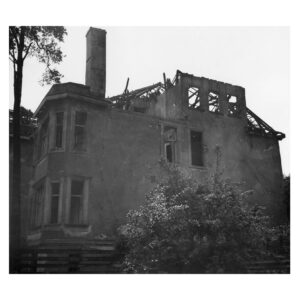 After his liberation from his hideaway on May 8, 1945, Ascher, now aged 52, immediately began to paint and draw again. At first, he began by reworking or adding to existing pictures. It is significantly his alter ego, the sad Bajazzo (Clown) of 1924, that, early on, he overpaints, or rather, completes. 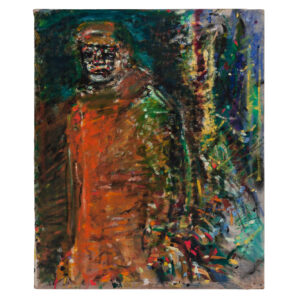 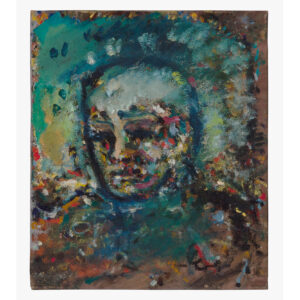 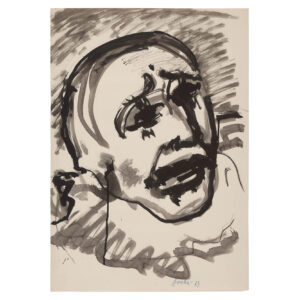 Ascher then turned to nature painting in the broadest sense: landscapes, forest scenes, portraits of trees, flowers and wide landscapes, all inspired by hours of walking in the nearby Grunewald forest. He works with renewed immediacy and urgency, dramatically simplifying forms and medium. His thick, bright pigments suggest both vibrant, life-affirming joy and, in the rough-hewn nature of his brushstrokes, a dark, inner anguish transformed into light. Especially the trees, singly or in rows, in groups of two or three, become standing figures that confront us, each as unmistakable as each individual. 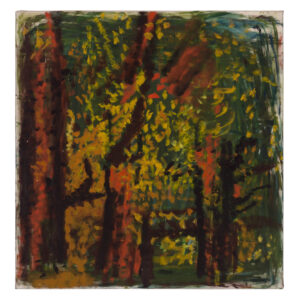 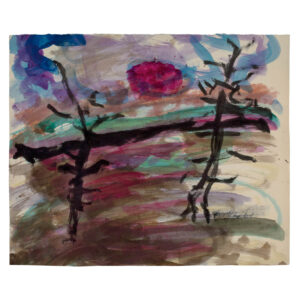 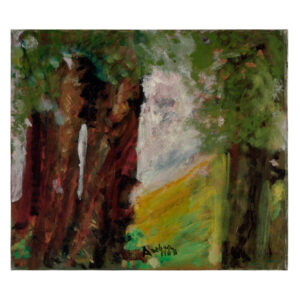 Recently a series of head studies in ink on paper has been discovered. 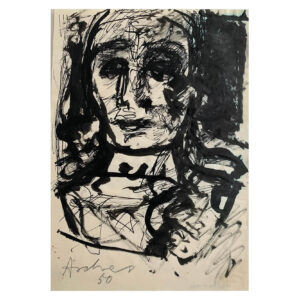 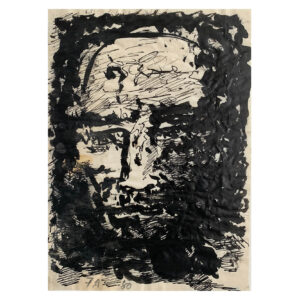 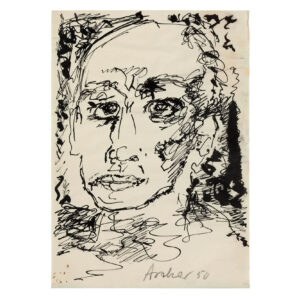 These portraits are frontal, confrontational, forthright forms that all-but fill the entire page, intimate and provocative, just like their surrogate forms in nature, the trees and flowers, which we can read as celebrations of the survival and continuity of nature even in the face of cataclysm. 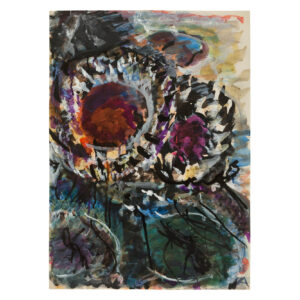 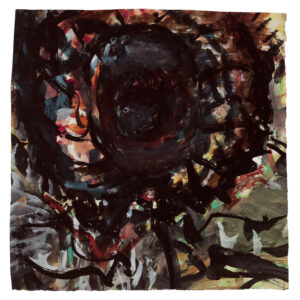 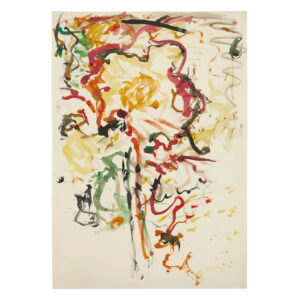 Fritz Ascher died in 1970, only months after a large solo exhibition at the legendary Rudolf Springer gallery in Berlin.

“Imagine that you, as you may say, survive! You come into a world where you are a stranger; into the world of the survivors who rule the earth. Do you then want to live with them?”

Fritz Ascher’s early symbolist-expressionist works with Christian and Jewish themes are followed, after 1945, by vibrant and expressive depictions of trees, flowers and portraits. This presents a profound change in subject matter and fundamental approach of his art, from ambiguous storytelling with exaggerated figures and complicated compositions to landscape elements; from clearly planned, finished paintings with preparatory drawings to a markedly simpler and more direct conception of the landscapes.

At the same time, there is a creative continuum in Ascher’s acute sensitivity to what he saw, in the urgency of his line, intense colors and the individuality of his work. Powerful emotions seem to lurk beneath the apparent directness and economy of the tree and flower paintings, as in his earlier symbolic and narrative paintings. However, the drastic turn towards nature and the urgency and nervous energy of his post-1945 work was most likely cathartic as well, following an inner psychological need to overcome his trauma.