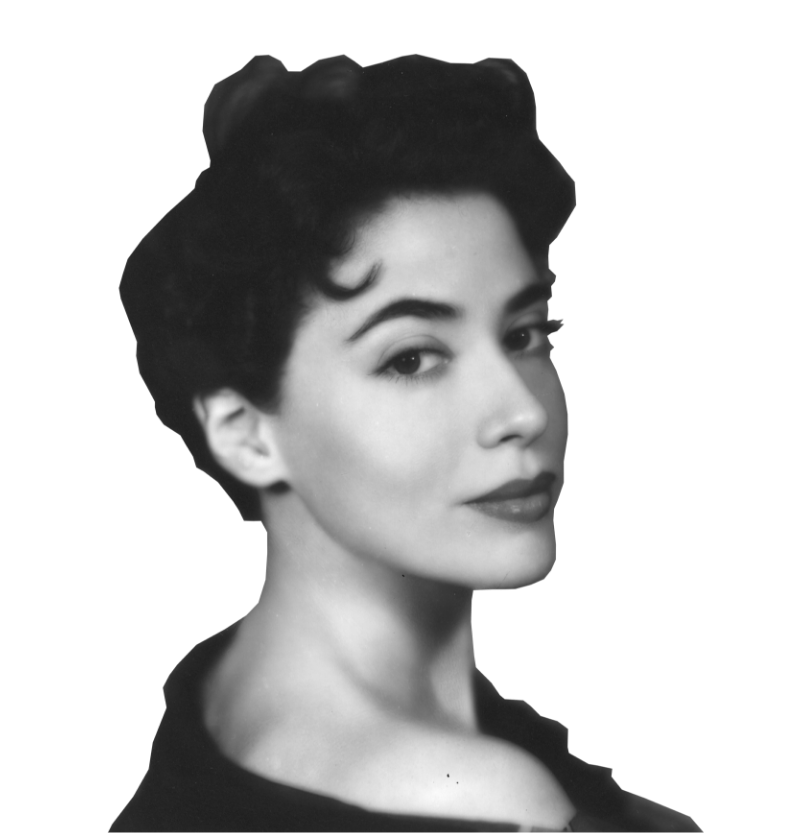 “I loved fighting the Germans even if it was just on paper.”

Lily Renée arrived during the Holocaust in New York City as a teenager, and somehow found work in the male-dominated comic book world. By the time of her retirement, she had become a legend. Her heroic female characters, like Lily herself, smashed through the glass ceiling of gender expectations. They inspired several generations of young readers, both girls and boys, to rethink the norms that so often otherwise surrounded them.

Fleeing Austria – From Privilege to Poverty

Lily Renée Willheim grew up in a prosperous Viennese Jewish family. On March 12, 1938, German Nazi troops annexed Austria. After the Anschluss they immediately began to enforce strong anti-Jewish regulations. After the November Pogrom (Kristallnacht), on November 9th and 10th, 1938, Britain and Germany signed an agreement permitting Jewish children under 17 from German-occupied countries to come to Britain if they could find sponsors. 17-year-old Lily Willheim qualified. Leaving her parents behind, in April 1939 she was placed on a Kindertransport to Leeds, England.

For nine months, she lived in Leeds with the family of her pan pal Molly and in London as a mother’s helper and a nanny. Meanwhile, she waited for her parents to escape Vienna and follow her to England. When she received a letter from them saying they had managed to immigrate to America, she was able to board a Kindertransport ship and arrived in New York on January 30th, 1940. There, the family lived in a rooming house on East 72nd Street in Manhattan and began a new life.

Lily demonstrated her artistic talent as a teenager.

She left Vienna on the Kindertransport for England when she was 17 and lived in perilous conditions for two years until she could depart to New York where her parents had already emigrated.

She became a highly popular comic book artist during the Golden Age of Comics in the 1940s, succeeding as a woman in a male-dominated industry.

She used her talent to create charismatic heroines who fought the Nazis and always won.

Lily was one of the first female comic book artists. Many male artists and writers had been drafted after the US entered WWII, so publishers hired women to fill the shortage. GIs overseas were avid comic book readers. Superheroes fighting the Germans, the Italians and the Japanese were wildly popular, and Lily’s dynamically illustrated stories fed their hopes as much as hers.

Born into a prosperous, assimilated Viennese Jewish family in 1921, Lily grew up attending opera and ballet performances. From an early age, she started to draw and paint. While still in school, she attended the Academy of Visual Arts as a guest student. Hitler’s annexation of Austria in 1939 dramatically changed Lily’s sheltered life. In April, she was able to leave on a Kindertransport to England. A few months later, her parents were able to flee to the United States, where their arrival was registered in November 1939. Lily was reunited with her family in New York shortly after, in January 1940. They lived in a crowded tenement building, often going hungry and desperately poor. Lily found work drawing publicity material for Woolworth catalogues, painting Tyrolean designs on small wooden boxes, and modeling. 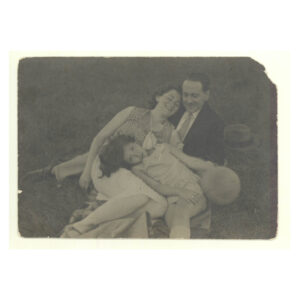 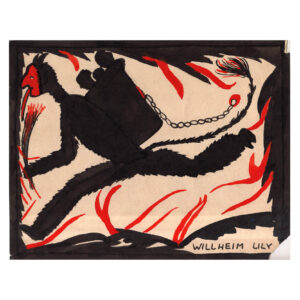 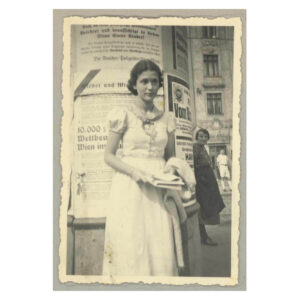 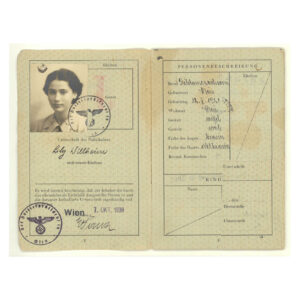 “I just wanted to say the name ‘Señorita Rio,’ it’s sort of a fantasy. Señorita Rio got clothes that I couldn’t have … and had adventures and was very daring and sexy and glamorous.”

“I just wanted to say the name ‘ Señorita Rio,’ it’s sort of a fantasy.

-From an interview between Trina Robbin and Lily on Nov 29, 2006

In New York, Lily looked for possibilities for her own further education. While attending night classes at the Arts Students League and the School of Visual Arts, she responded to an ad looking for experienced illustrators at Fiction House, an established publisher of comic books. In the middle of a boom in the American comic book industry, they were hiring women to replace the male artists who had been drafted into the armed forces.

She began working as a penciler and inker. Fiction House comic books were unusual in that they often featured female heroes – beautiful girl detectives and spies who didn’t need men to save them. This gave Lily the opportunity to draw, and later invent, dashing, daring female characters. 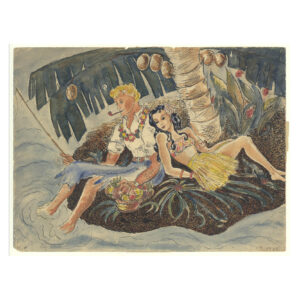 Longing for an Island Life, January 1939 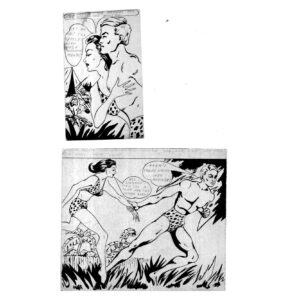 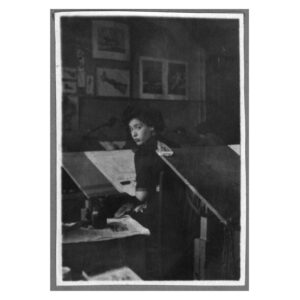 In her first series, Jane Martin, which ran in Wings Comics, the fearless and hard-nosed wartime nurse heroine has no problem dressing like a gypsy and singing to a roomful of Nazis, then freeing captured American soldiers. Lily also drew beautiful decorative splash panels. 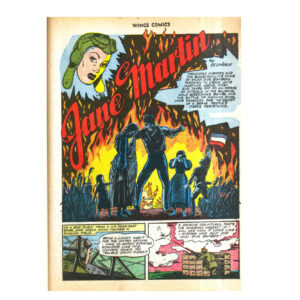 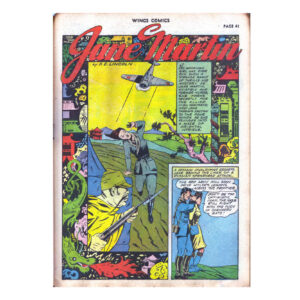 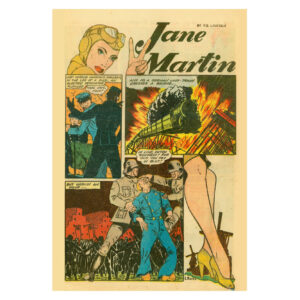 Fighting Nazis With Pen and Ink

Her next series, The Werewolf Hunter, which ran in Rangers Comics, gave Lily the opportunity to make the stories less about werewolves and more about fantasy. She developed the plots and added a German Expressionist style to the visuals. For example, the layout from an October 1947 story is full of jagged angles, reflecting the madness and anxiety of the main character. 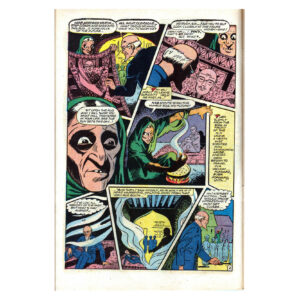 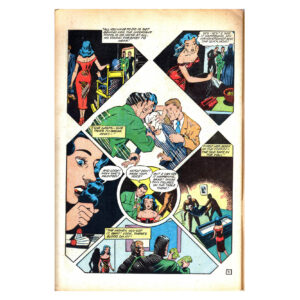 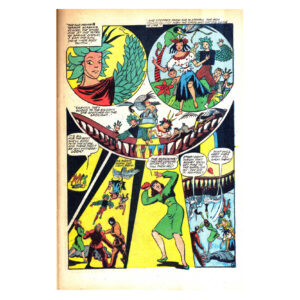 By far her most famous character was Señorita Rio, a female spy, secret agent, and, as a cover, a Hollywood starlet and dancer. The adventures of the South-of-the-border adventuress doing wartime espionage for the U.S. government appeared in Fiction House’s Fight Comics. Thanks to the Señorita stories, Lily became a star of the publishing company. Señorita Rio was a perfect fantasy for the shy artist and bore a strong resemblance to her. Lily could not afford leopard coats and high heeled shoes, but she wanted her heroine to be as chic as possible. As late as 1947, Rio was still fighting Nazis in Latin America.  As one story says, “The Nazi war is over, but the struggle for a Fourth Reich begins.” 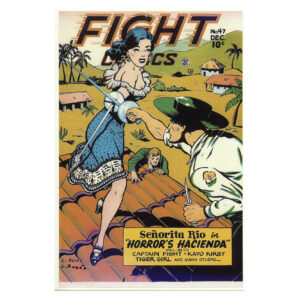 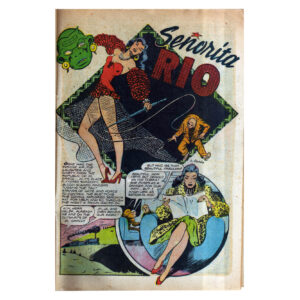 Even The Lost World, Lily’s fourth series, has villains who are thinly disguised Nazis and offers a warning that they could return at any time. 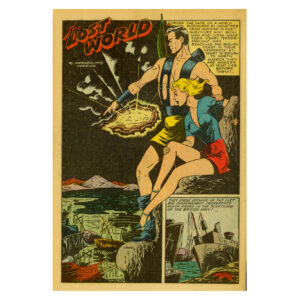 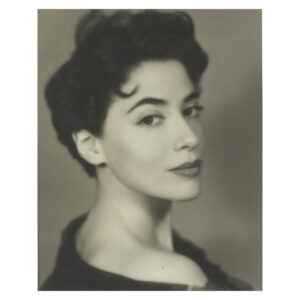 Lily continued to write and draw comics for other publishers and audiences until the 1970s. She also wrote and drew children’s books, wrote plays, designed textiles for Lanz of California and jewelry for Willy Woo. In 2018, when she was 97 years old, Lily received the Decoration of Honor in Gold for services to the Republic of Austria from the Austrian Consulate General in New York, and in 2019 returned to Vienna to be honored as one of three artists in the exhibition “Three with a Pen. Lily Renée, Bis Spira & Paul Peter Porges” at the Vienna Jewish Museum. She lives in Manhattan. 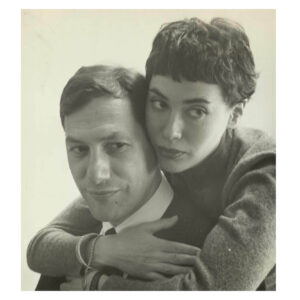 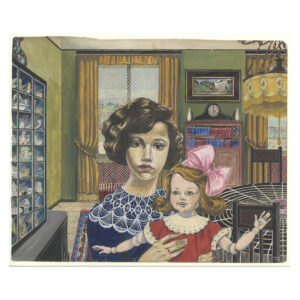 Retrospective self-portrait in the Vienna apartment of the Wilheim family, 1953 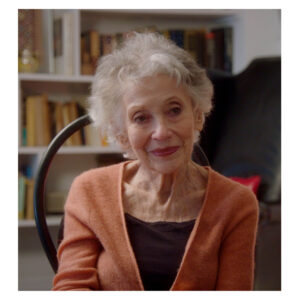 Life and Art Sustain Each Other

Sometimes in her art, Lily Renée drew from her own real-life experiences, but there were aspects of her female characters – their courage, their cunning, and their clothing – that represented the experiences she could only dream of.

In her comics, elaborate splash panels included decorations and emotional scenes that demonstrated her artistic talent.  She was inspired by what was happening on the world stage.

For example in the splash panel above for Jane Martin for Wings Comics 35, she illustrates a peasant family, lit by the flames of their burning house, weeping.  But a boy in the foreground defiantly waves a flag, the French tricoleur.  This could easily be a war poster: the people suffer, but they don’t give up; they will fight on.

Later on, her Lost World comics featured landscapes full of ruined buildings. In a November 2011 interview, she said, “I had seen so many ruins that when I was in Fiction House, I was drawing “(The) Lost World” … I was very good at drawing ruins because I had seen (them)”.

As she said to filmmaker Adrienne Gruber in 2019: “I loved fighting the Germans even if it was just on paper.”

Lily Renée (1921 –currently living in NYC):
From Refugee to Renown