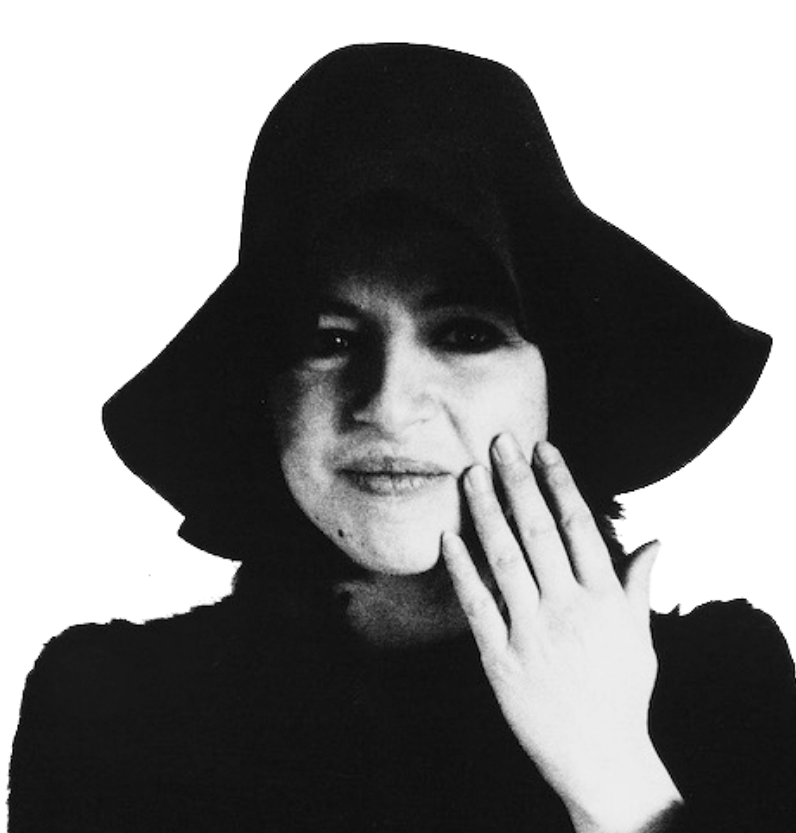 “The way to beat discrimination in art is by art. Excellence has no sex.”

-Eva Hesse, from “My Memories of Eva Hesse” by Cindy Nemser

Eva Hesse arrived in the United States as a 3-year-old, was raised in a community largely of Holocaust survivors, and by her Twenties was a rising star on the New York art scene, contributing a unique voice to the shaping of post-Abstract Expressionist art. A key turning point in her innovative art was a return visit to Germany on an artist fellowship. How do we understand the work of this brilliant figure whose life suddenly ended, from brain cancer, at the age of 34?

Leaving Germany as a Child

Eva Hesse was born in 1936, into an observant Jewish family in Hamburg, in northern Germany.  To escape the Nazi regime when she was almost three years old, her parents sent her and her older sister Helen, to the Netherlands, aboard one of the first Kindertransport trains. After nearly six months of separation, they were able to rejoin their parents and the family moved on to England where they stayed briefly until they emigrated to the United States in the summer of 1939. They settled in Manhattan’s Washington Heights, an area of the city where many Jewish refugees from Germany settled during the years that followed. While Eva grew up in America, it’s likely that she couldn’t help but be aware of what had happened during the Holocaust in her homeland.

She immigrated with her family to New York in 1939 when she was 3 years old.

She graduated from Yale University in 1959 after studying with Joseph Albers.

Her return to Germany on an artist’s fellowship for 15 months in 1964-5 profoundly transformed her work.

The Kindertransport was organized after the November Pogrom (Kristallnacht), masterminded by Florence Nankivell. The first train left Berlin for The Netherlands on December 1, 1938. Eva’s parents were able to get her and her sister Helen on one of the first Kindertransport trains to leave Germany.

By the time Eva Hesse was three years old she had traveled from Hamburg, Germany where she was born in 1936, to The Netherlands, then to England and then to New York as her family attempted to escape the Nazis.

In 1944, her parents separated. Her father remarried the following year. Her mother committed suicide the year after that, in 1946. Eva didn’t like her step mother. She had her older sister, but she was essentially motherless from the age of 10. 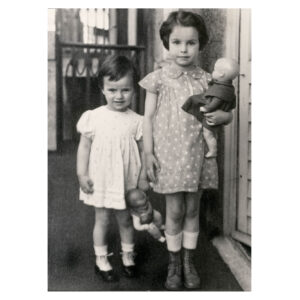 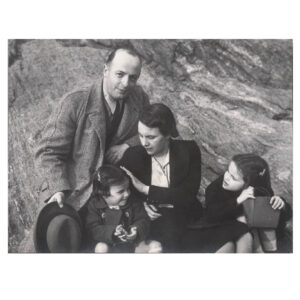 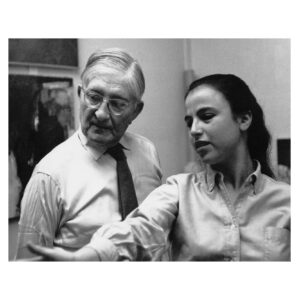 Eva Hesse and Professor Josef Albers at the Yale School of Art and Architecture, c. 1958

“…nothing in my life had ever been normal and the only time I ever felt secure was when I was doing my art.”

After graduating from Yale in 1959 she came back to New York. Her friends were fellow young artists, Donald Judd, Yayoi Kusama and Sol LeWitt, artists who were beginning to define the move away from Abstract Expressionism toward Minimalism and Conceptual art.

In November 1961 she married the sculptor Tom Doyle. They were in Woodstock together to participate in Allan Kaprow’s Happening in August 1962. She was making paintings, and drawings, and had her first one-person exhibition of works on paper at the Allan Stone Gallery, on the upper east side of Manhattan, in 1963. 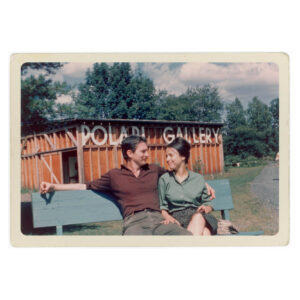 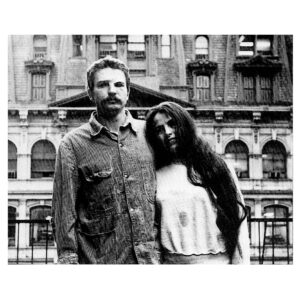 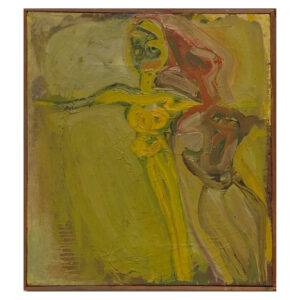 In 1964 Eva and Tom moved to Germany for an artist’s residency. For 15 months they lived and worked in an abandoned textile mill in Kettwig an dur Ruhr, near Dusseldorf. While her marriage was falling apart, her work was transformed by the experience. She began sculpting with some of the industrial materials left behind in the building.

They returned to New York and were divorced in 1966.

The titles of her work may offer clues to her feelings about the Holocaust and Germany. For example, The title of Ringaround Arosie (1965) while a child’s song, derives from the grim reality of plague-ridden medieval Europe (the “ring around the rosie(s)” refers to the red, circular rashes that began on a plague victim’s skin;  “pocket full of posie(s)” intended to protect one from the plague; the “ashes, ashes, all fall down” referring to those who nonetheless die from the plague and are burned). 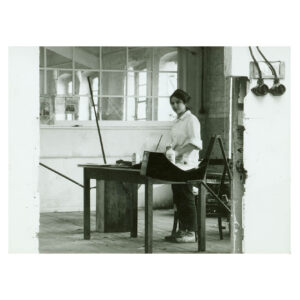 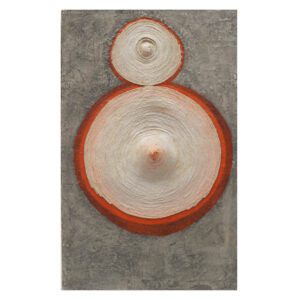 Women artists were struggling to receive notice and be taken seriously. Yet Hesse was inspired by the work she had begun in Germany, despite the depressing circumstances of her life there, and her chronic feelings of doubt. She regarded her large 1966 sculpture, Hang Up, to be her first significant work of art. It was included in the landmark 1966 “Eccentric Abstraction” exhibition at New York’s Fischbach Gallery, organized by the critic Lucy Lippard, and signaled her arrival on the avant-garde scene. 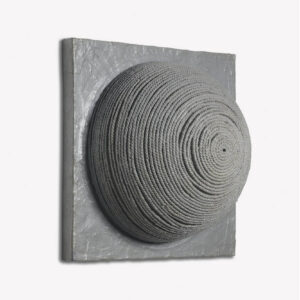 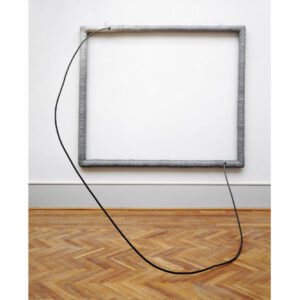 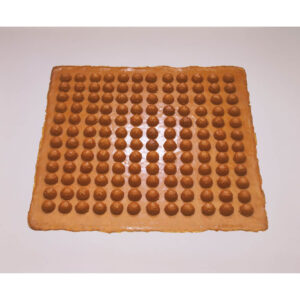 In November 1968, she exhibited her large-scale sculptures at Fischbach Gallery in an exhibition entitled “Chain Polymers”—which turned out to be her only solo sculpture exhibition in America during her lifetime, and firmly established her reputation.

The following year, her large piece Expanded Expansion showed at the Whitney Museum in the exhibit, “Anti-Illusion: Process/Materials”. This work, a gargantuan fiberglass, polyester resin, latex, and cheesecloth work—10’2” high, with a variable width as much as 25’—exemplifies Hesse’s push against artistic convention, and specifically against the idea of monumental sculpture as defined by volume, mass, and verticality. It’s a work of odd form—with enormous height and much greater width, but virtually no depth and no sense of mass. 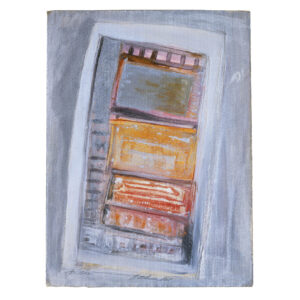 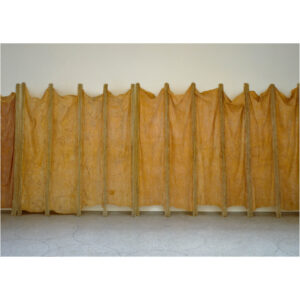 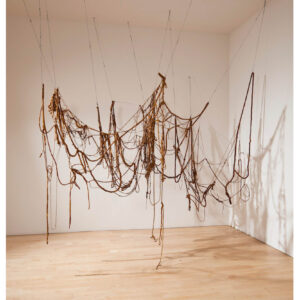 In April 1969, she collapsed in her studio while working on Contingent, was rushed to New York Hospital and was operated on to remove a brain tumor.

She resumed work after emerging from the hospital and spent part of the spring and summer of her last year at the artists’ colony Byrdcliff, in Woodstock, with her friend Gioia Timpanelli. Their routine was to work all day, from 8am to 5pm, then see friends in the evening and get to bed early. They watched the first moon landing on television together on July 20th.

She returned to New York City for a second operation in August. Once again exiting the hospital in mid-October, albeit very weak, she insisted on working to complete the piece for an upcoming exhibit at Finch College Museum of Art in December. Students from the School of Visual Arts (where she had been teaching, part-time), together with friends—Bill Barrette, Jonathan Singer, and Douglas Johns—helped make enough pieces to complete the work.

Eve Hesse died on May 29, 1970. Her death at the age of 34 ended a career that would become highly influential, despite spanning only a decade. 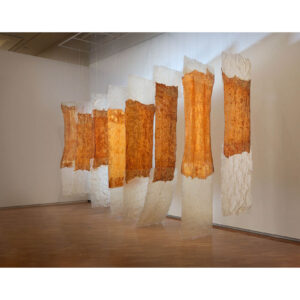 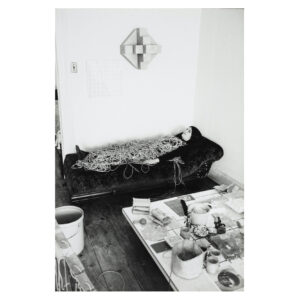 Materials used by Hesse during the summer of 1969 in Woodstock, New York

Eva Hesse most certainly shaped an artistic life for herself in the United States. She was among those artists who, the mid-1960s, pioneered the post-minimal trend in sculpture, participating in path-breaking New York exhibits. She is known as a pioneer in the use of certain materials, such as fiberglass, plastics and latex.

Her influence on contemporary sculpture derived from the work she did during her year-long fellowship in Germany in 1964-65 when she began to work with industrial materials.

Her work has often been discussed in terms of feminism—responding to the phallic rigidity of sculpture, its “maleness,” by the use of softer materials and by means of works that may be seen as a satire of maleness. Her sculptures, paintings and drawings have also been said to reflect not only the general painful experiences of her life but, in particular, her flight from the Nazis.