“The origin of all art is what we call propaganda. … I do not say that art is my aim; art is my means.” 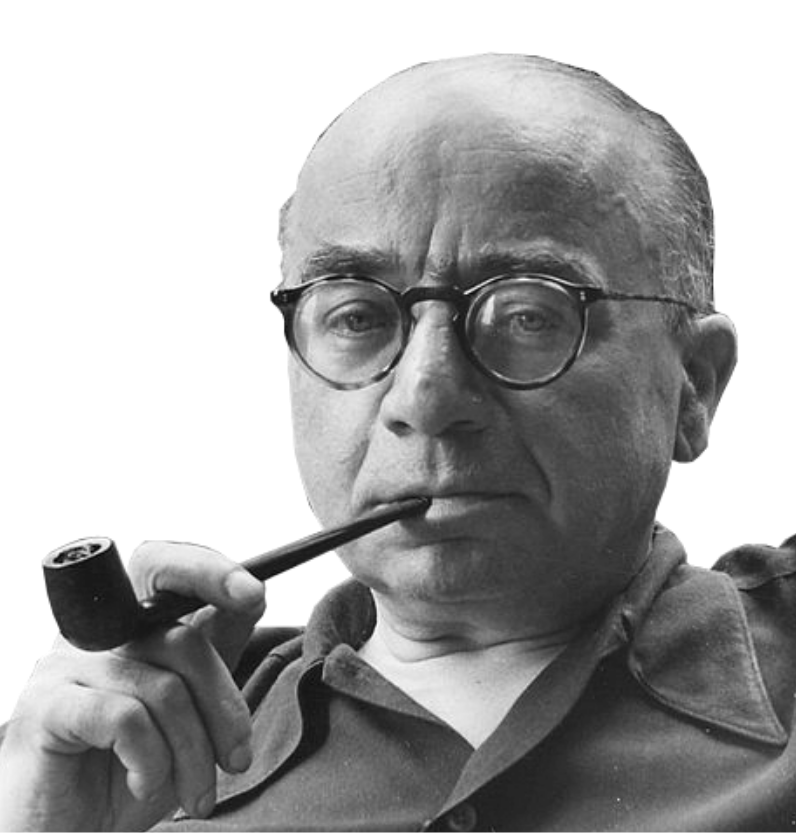 Prior to World War II, Polish-born Arthur Szyk was best known for his ornately detailed renderings of historical subjects and Jewish themes. But after the German invasion of Poland in September 1939, he gained the accolades of international audiences for his biting caricatures of Nazi leaders and his efforts to garner support for the Allied cause and Europe’s persecuted Jews.

In 1940, Szyk took his mighty pen to the United States, where he quickly became a popular artistic sensation. His images graced the covers and inside pages of leading magazines, like Time, Colliers, Esquire, Look, The American Mercury, Coronet, and Liberty. Szyk’s cartoons regularly appeared in The New York Post, The Chicago Sun, and PM. Millions of Americans knew his work, even if they could not pronounce his name.

Contributing to the Allied War Effort from Canada and the US

Polish-born Szyk was an established artist dividing his time between Poland and France when he moved to England in 1937. His work as a shrewd political satirist was well known in the US. In 1940, it seems likely that the Polish and British governments aided Szyk’s departure from England to Canada and then the United States. Szyk and his immediate family disembarked in Halifax, Nova Scotia on July 12, 1940, along with some 2,000 children who had been evacuated from Great Britain to Canada.

In October 1940 he obtained a visitor visa to the United States, and decided to stay there, trading it in for an immigration visa.

Szyk was well known for his ornate illuminations and book illustrations of historical subjects and Jewish themes.

Skilled with words as well as a brush, Szyk sometimes described himself as “FDR’s soldier in art.”

Following Germany’s invasion of Poland in 1939, he focused on producing anti-Nazi cartoons, first from England and then in 1940 from Canada and the United States.

By summer 1940, Lisbon was the only neutral port in continental Europe with ships still sailing semi-regularly to the United States. Polish Jews were trapped in eastern Europe and no longer competing for American immigration slots.

Arthur Szyk was born to Jewish parents, Solomon and Eugenia Szyk in Łódź, Poland, part of the Russian Empire at that time. He had his first public art exhibition at age 15, and had formal art training in Paris and Krakow. He visited Palestine in 1914 with a group of Polish-Jewish artists and studied Muslim art.
Then he was drafted into the Russian Army and served in World War I. Between 1919 and 1920 during Poland’s war against the Soviet Bolsheviks, Szyk served as a cavalry officer and artistic director of the Department of Propaganda for the Polish Army in Łódź. During that time, Szyk produced small paintings based on themes from Jewish history and Slavic folk tales. 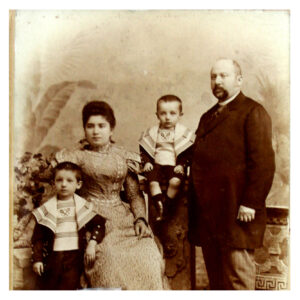 “I am convinced as an individual, as an artist, as an exile, and as a future American that the only hope for the future of the world lies in the Anglo-Saxon democracies.”

In 1921, Szyk moved to Paris, with his wife Julia and their son George. By then, he was well known for his illuminations and book illustrations, in a style reminiscent of Persian miniatures. He worked on several significant projects in France, including illustrating the Statute of Kalisz, the Haggadah, and a series of watercolors on the American Revolutionary War. The themes of his most admired works, democracy and Judaism, earned him both fame and significant commissions.

Szyk resided in England from 1937-1940 to supervise the publication of the Haggadah, a Jewish religious text that is read every Passover to celebrate the Exodus from Egypt and the triumph of the Jewish people over its enemies. 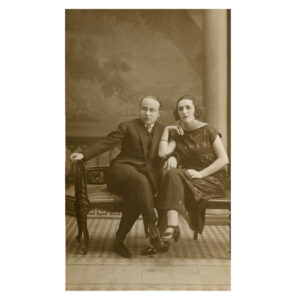 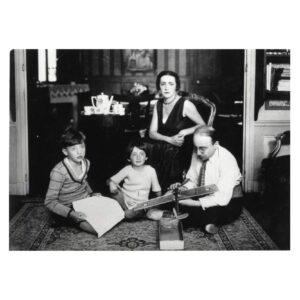 Szyk and his family left England for Canada in 1940. Here, he created artwork that called public attention to the Nazi threat and paid tribute to the plucky British and Canadian servicemen who were fighting to defend democracy.

After spending some six months in Canada, Szyk departed for the United States. He worked at a feverish pace, and his anti-Axis images graced the covers and inside pages of leading magazines, like Time, Colliers, Esquire, Look, The American Mercury, Coronet, and Liberty. His cartoons appeared regularly in The New York Post, The Chicago Sun, and PM. Millions of Americans saw his work, even if they could not pronounce his name. 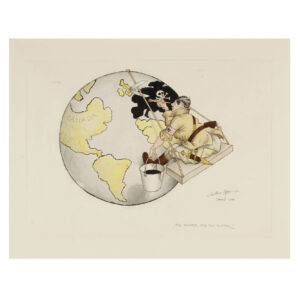 The Painter and the Clipper, Ottawa, 1940 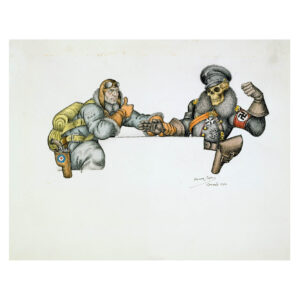 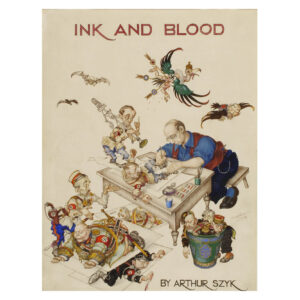 The country was hotly divided on the issue of involvement in World War II. While most of the population was ardently anti-Nazi, Gallup polls from summer 1940 indicated that 80% of those surveyed opposed an American declaration of war against the Axis powers. In fall 1941, Szyk took aim at the leading isolationist figures in the America First Movement, Charles Lindbergh and Senator Gerald Nye. The artist played up Lindbergh’s prior associations with German leaders, like Göring, and portrayed him as a would-be Stormtrooper, just waiting to be appointed Gauleiter of a Nazi America. 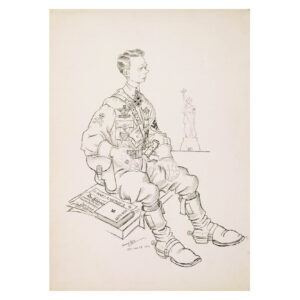 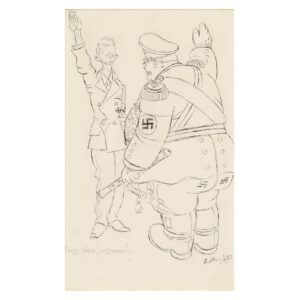 Szyk’s warnings about the threat of Nazism to the United States gained greater public exposure following Putnam’s publication of a collection of his provocative anti-Nazi cartoons and satires in The New Order in summer 1941. 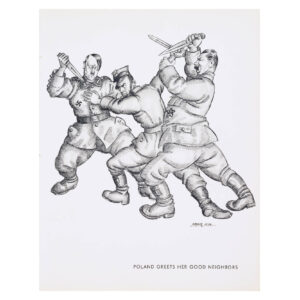 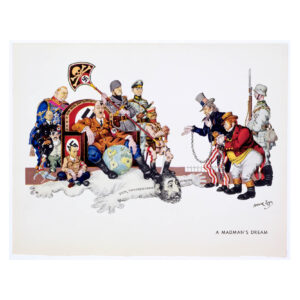 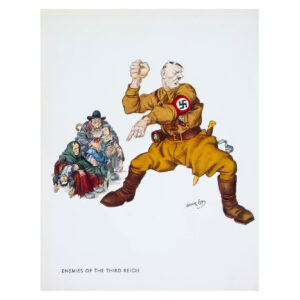 Szyk was a leading anti-Fascist political caricaturist as well as an advocate for Jewish rescue. He devoted a great deal of time and energy to the Emergency Committee to Save the Jewish People of Europe, and pushed for the establishment of an independent Jewish state in Palestine. Szyk dedicated Tears of Rage to “those of my people who fight for the right to die with their boots on–my pride, my love, my devotion.” 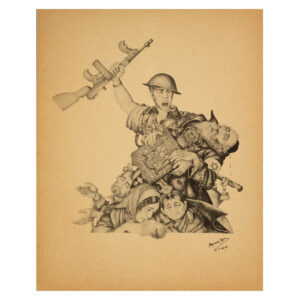 Tears of Rage, fundraising print for the Emergency Committee to Save the Jewish People of Europe, 1944 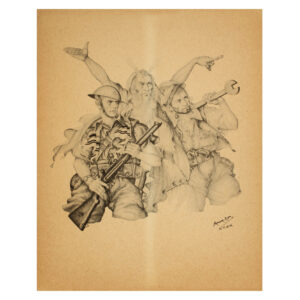 Modern Moses, fundraising print for the Emergency Committee to Save the Jewish People of Europe, 1944 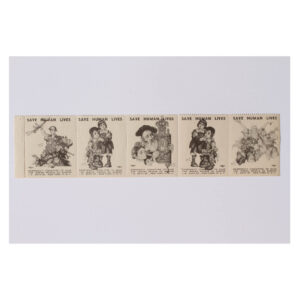 Poster stamps created for the Emergency Committee to Save the Jewish People of Europe; designed 1942, issued 1944-1945

Szyk used his 1942 drawings of Roosevelt’s Four Freedoms to reach a larger, non-Jewish audience and drum up financial support for the Emergency Committee to Save the Jews of Europe. In recycling these images – Freedom of Speech, Freedom of Religion, Freedom from Want, and Freedom from Fear – Szyk intentionally linked Jewish rescue to the foundations of American democracy. Helping to save Jewish lives from destruction at Nazi hands was portrayed as a truly American goal. In 1943, First Lady Eleanor Roosevelt publicly lauded his efforts. 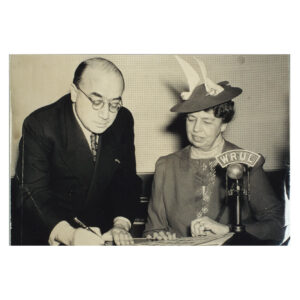 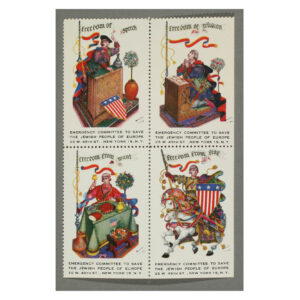 Fundraising poster stamps illustrating President Roosevelt’s Four Freedoms for the Emergency Committee to Save the Jewish People of Europe, c. 1944 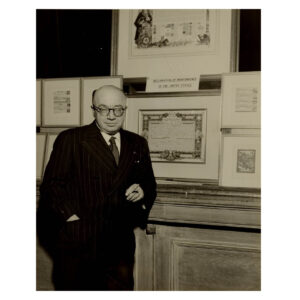 Szyk received his US citizenship in 1948. In 1951, he was investigated by the United States House Un-American Activities Committee as a suspected Communist. His son, speaking on his behalf, declared his non-affiliation with any Communist organization. Later that year, on September 13, Szyk suffered a heart attack and died at age 57.

During the first four decades of the twentieth century, Polish Jewish artist Arthur Szyk was best known for his richly detailed book illustrations and magnificent illuminations on Jewish themes. He used watercolor and gouache and quill pen and ink on paper and board. He usually began his compositions with a lightly applied but fairly complete “underdrawing” in graphite pencil. The design was then built up with successive layers of transparent and opaque watercolors, painted with sable brushes of varying sizes. A skilled calligrapher, he completed his own lettering in languages as diverse as Polish, Russian, German, French and English – languages he spoke fluently.

When Germany invaded Poland in 1939, Szyk focused his energy and talent on a personal war against Hitler and the Axis. He created caricatures that were as carefully constructed as his illuminations, with exaggerated faces and postures. This crusade against Nazism and German militarism was indelibly linked to his sense of identity as a proud Jew, a Polish patriot, and later as an American.

The Cartoon Crusader Comes to America: Arthur Szyk’s Battle against the Nazis in the New World

The Work of Arthur Szyk

Producer: Facing History and Ourselves